Many Romanian Roma women identify themselves with such descriptions. In the past fortune-telling had a strong tradition within many travelling Roma groups wandering across the European area. Fortune telling abilities were primarily attributed to, in the main, older women, undoubtedly for their lifelong experiences. Their potential clients were to be found anywhere in the streets of the villages and towns where their caravans happened to have stopped.

Me and an ethnologist, Ivana Šusterová, have decided to make a fusion between photographic work and an ethnological study. For over four years, we have been researching the world of Romanian Roma women who professionally practice fortune telling and witchcraft. Before the revolutionary year 1989, their work was affected by the Communist regime which prohibited fortune telling and witching activities under the threat of imprisonment. In recent years, the popularity of their services is again on the upsurge and the topic is widely discussed, at home and in the media. On the other hand their names are mentioned in police reports, they are charged with blackmail and with manipulating with their clients.

In my photographic collection I try to record the consequences of globalisation, which has inherently transformed this profession, which in itself balances on the thin divide between mysticism and showmanship for the client. Today these women no longer walk the streets in search of suitable palms from which to tell their owner´s future, but the clients themselves seek them out on the basis of advertisement in the media or on social networks, subsequently visiting them in their splendid houses. Instead of palm reading or fortune telling from tea leaves, it is now suﬃcient to know your name, date of birth and perhaps an on-line chat on the social network. The profession has been transformed into a business, inherited across generations. Nine year old girls are already starting their promotional “vrajitoare” proﬁles on the Facebook. Dolls are at one moment their toy, yet at any time they can transform themselves into a magical artefact with the ability to regain a client´s lost love. 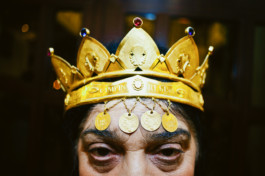 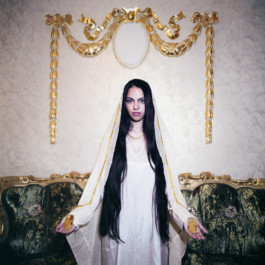 Selena is a granddaughter of vrăjitoare Maria Campina. She is the next generation of the women with this gift. Romania 2014

“If a bride has magical powers which are passed down from mother to daughter, it can be an advantage for a better marriage because she will be able to bring extra money to the family. It is our tradition in general to pay for a bride. The price depends on the reputation of the potential bride and her family, she has to be a virgin without any doubts.” 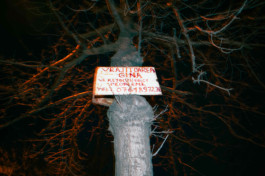 These DIY banners in the streets of Bucharest are rare to find because vrăjitoare transferred their advertising to social networks. Romania 2013 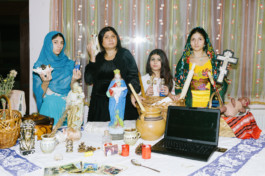 Vrăjitoare Margareta with her daughters Melissa, Fatima, Beatrice. The laptop here demonstrates that they are the modern ones. Romania 2016

“I am trying to do my best helping people because it is my mission. My name is Danusia Florica and I am 30 years old. I was born as a witch, I inherited this gift from my mother and then I was learning the craft. I am the only one who uses white magic because I do not want to hurt other people. I believe in God and thats why I doesn't use spells, only prayers. It is my greatest happiness when people are grateful, satisfied with my work and smiling.”

Vrăjitoare Danusia surrounded by her objects is praying for her clients. Romania 2017

A magical artefact of vrăjitoare Vanessa with the ability to regain client´s lost love. Romania 2017

Vrăjitoare from Natalia’s family are demonstrating their own version of love ritual. Romania 2017

Vrajitoare Vanessa's daughter is uploading a video which she had taken for her mother’s facebook fan page during our interview. Romania 2017

“To be honest, there is a difference. In the past the processes were more simple. Today every witch  wants to have something special, typical only for her so they started to add new things to be more interesting for clients. They complicate the process of work. They would like to be as a big company which  is celebrated for its greatness. I can also buy my own golden crown and be self-proclaimed queen of magic. In these times you can be anything you want to be. It depends on your imagination. Authenticity can be gained through simplicity and  humility and you need to have a big heart.” 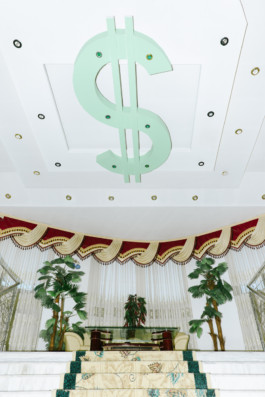 The Entrance with dolar decorative element in the house of vrăjitoare Sidonia, Romania 2017

Vrăjitoare Atena is performing a ritual with an ethnologist Ivana. Romania 2017

Vrăjitoare Amalia fortune tell through corns and seeds inside these bottles. Romania 2017 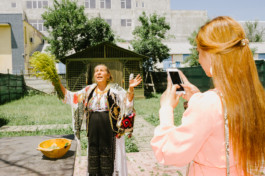 Vrăjitoare Bratara was recorded for her facebook fan page while she is performing a ritual to bless her grandson's marriage during the summer solstice period. Romania 2017 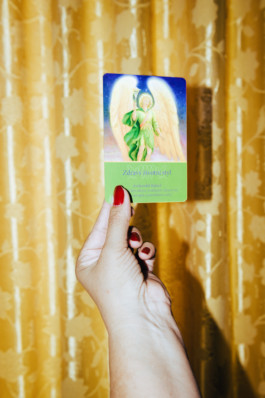 “Do you have troubles and cannot  find a solution? Are you facing a tough decision? Are you afraid of whatever is coming? Do you love someone secretly? Would you like to know if it is the right one for starting a new relationship? You think that your situation has  no way out? You should know that  I can help you. Call me or leave me a private message. God bless you.” 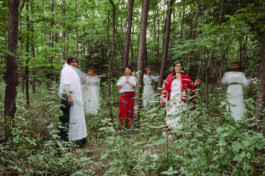 A daughter of vrăjitoare Mihaela and an ethnologist Ivana are picking flowers for Sânziene rituals in the yard behind their house. Romania 2017

These potions are used by vrăjitoare Monika for love spells on the left side and for a charm on the right side. Romania 2017

Vrăjitoare from Margareta’s family are performing rituals on March 1 during the celebration of Mărțișor. Romania 2017

“I work with elements such as water and fire. I can take client’s problems away from them through my spells. All the bad things go away with water or fire. It is not good for people to carry an evil inside them.” 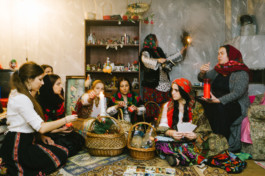 Vrăjitoare from Elena’s family are performing rituals during the celebration of Mărțișor. Romania 2017

“I have no rival as a witch in expelling the devil. I have got a gift that was given to me by God. I know priests who tried to solve problems like this but they were not able to do it. They sent these people to me because they knew their problems didn’t come from the God but it was done through casting spells. If a client is obsessed with the devil then he/she must go with me to such place where you can find water at the midnight. If it is really bad I must sacrifice an animal during the ritual. Neither the priest nor monk didn’t use such practices.”

Vrăjitoare Natalia is transferring black magic spells from a human body to a black hen. Romania 2017

Vrăjitoare Natalia is performing a ritual with a burning broom. Romania 2017

Vrăjitoare from Mihaela's family made flower crowns which are enchanted and thrown into the river with burning candles. Romania 2017 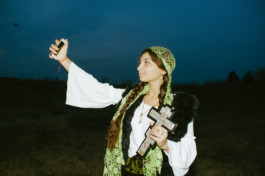 Vrăjitoare Monika is taking a selfie picture with a cross before rituals begin. Romania 2017